Posted on October 14, 2013 by Cynthia Winton-Henry

What is Mystic Tech and where did it come from? Find out a little about myself and how Mystic Tech came to be in my article Cynthia & Mystic Tech.

“Mystic Tech is home to the teaching and spiritual companionship offered by Cynthia Winton-Henry.

Profoundly moved by a liberating love she is dedicated to fostering freedom by integrating body and soul in joyful ensoulment. Through the arts and skillful listening to the wisdom of the body and the Divine she seeks intelligent, playful soul-utions needed for life.”

We are so excited to have George, an educator, and new InterPlayer bringing his heart and imagination to the InterPlay Practice. He will be in Oakland learning how to lead until the end of August!

Keep your eye on what will come from this.

Today, he told me that he is volunteering at the St. Vincent de Paul Community Center down the street from InterPlayce, a group with whom we would love to offer InterPlay!

Forgive Us Our Christmases

Posted on December 27, 2012 by Cynthia Winton-Henry

Connections across the seas are lasting. We are in each others mangers, temples, and crowded living rooms. Our hearts, too full at times, do not sky away even so.

Grateful to Prashant, Hazel, and all the InterPlay pilgrims who dance on the bridge of love like this http://kahanimarga.wordpress.com/2012/12/23/forgive-us-our-christmases/

Invitation to savor our InterPlay India Trip: Share this book?

Posted on November 30, 2011 by Cynthia Winton-Henry

All of us who took the InterPlay India trips over the last four years had our lives changed. I recently came across a book that reminded me of our trips, Nine Lives: In Search of the Sacred in Modern India by William Dalrymple. I had an idea that it could be fun to share this read with you travelers to India.

George Muedeking and Stephen Winton-Henry looked the book over and were ready to read. It’s humane, perceptive travel writing according to the Indian Express. There are glowing comments from Deepak Chopra and Elizabeth Gilbert. As soon as I started reading it I was immediately taken back to the spirit, aliveness, and contradictions of life there.

I invite you to share this book with me. Let me know if you want to do this in an email at cynthia@interplay.org or by commenting below. I can start a private facebook group for anyone to comment or put quotes. Then maybe early January we can talk on the phone and share changes about what we’ve noticed in ourselves since that journey.

This is an invitation to anyone who went on any trip or to others who have traveled to or live in India.

Posted on October 25, 2011 by Cynthia Winton-Henry

I prayed for twenty years
but received no answer
until I prayed with my feet.
–Frederick Douglass

Where are your feet leading you to peace today?

Posted on September 29, 2011 by Cynthia Winton-Henry

Francoise Bosteels is a nun from Belgium. I met her in Mumbai at an InterPlay workshop and again in Bangalore. She enjoyed the InterPlay process very much.

In one of her books “Through the Needles Eye” she included a poem I wrote on Miriam’s dance to accompany a photo of one of her dolls. Since she was 17 years old the creation of dolls has been a form of meditation and a way to inspire people around the world to look more closely at the beauty and suffering of village people in India. 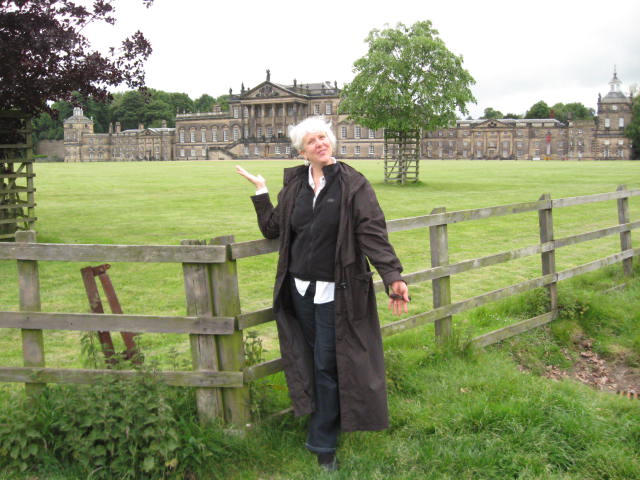 I’ve heard that the Maori of New Zealand claim the energy of their ancestors as a fountain upon which they float. People honor the dead every day around the world. Do I? I might, but where are they?

As an American hybrid with an unknown pedigree of laundry workers, farmers, and drunks, I surrendered such an idea as completely impossible, and thought to satisfy myself with stand in saints, Christian Bible characters, trees, and spirit guides, the usual catch as catch can entourage of spiritual wayfarers.

Then, my mother’s partner George uncovered the formidable roots of our historic family, Super Roots!

Rynold de Wynterwade, born before 1066, my 28th Great Grandfather, is noted in the Doomsday book. That’s a lot of great’s.

Joseph Lemeul Chester in “A Genealogical Memoir of the Wentworth Family of England” wrote that “Among all of the ancient families of the British Empire, there is none whose claim to antiquity is founded on a surer basis than that of the Wentworth’s.”

A solid line. No kidding. And not just the men…but names of the women as well, each born of wealth with names that carried their economic and social import.

Today, genealogy is the world’s number one hobby. There must be a reason for that. Many want to know. Where do we come from. Whose people are we?

Following a chance to teach InterPlay in the UK, my sister Val and I walked among the dead in places like the village of Wentworth (Wynterwade) and Alford where my people were born, married, bore children, lived and died.

Our pilgrimage bore witness to a mother lost to Alzheimer’s, our sister-journey, and my intuition that the simplest process of acknowledgment aligns us to time, space, and consequence, hunching that this opens the abundant fountain of ancestry on which our forebears arose.

Curious that this opportunity arose after India where I bowed at great holy places of Buddhism, Christianity, Hinduism, Gujarati Tribal Wisdom, and Gandhi and secretly sensed that by honoring those male religious founders could help in transferring spiritual authority for a day that will honor both male and female wisdom.

But, home from England a ghostly shadow accompanied me. What was this luggage, this consuming, heavy energy demanding integration alongside a new steely body sense of English strength (hopefully not a corset). Good news. Bad news.

I came home with stone minster kings and castle prisons for the poor in my skin. I think it is easier to bow to other people’s patriarchs than my own.

Ancestry gives super roots, for better and worse. Feeling into historic memory, place, and people is visceral and I am as always….too somatic for my own good.

I have just inherited a vast psychic estate.

Friends who inherit wealth report that their experience is not only mind-boggling, it changes everything. I just begin to sense the ways that this is true. For one thing, I’ll no longer underestimate the role that my family has played on the stage of the body politic.

For example: My mother is Lurley Katherine Wentworth and still dancing.

ELITE:
Robert Wentworth and Emma Woodhouse in the 1200’s were landowners (up to 89, 000 acres)  who walked among English royalty, wealth and power. see above

PURITAN PILGRIMS:
In 1636, William Wentworth and Susannah Carter departed Alford, England for a new England only to be banned with their teacher-comrades (John Wheelwright and Anne Marbury Hutchinson) for holding unorthodox beliefs (having a minds and theologies of their own).  William fought off death by angry Indians he had wished not to insult, but did by occupying their land.

PIONEERS:
Hiram Wentworth and Roxalina Stone from New Hampshire in the 1800’s joined a group to stop slavery in Missouri by moving west to live in an unspoiled Kansas, learn difficult crafts, run supplies to Denver in a wagon train, survive a deadly Indian attack, and practice faith until Hiram attracted attention as a healer.

MIGRANTS:
My great grandmother, Elizabeth Stumph Hug’s Swabian German parents pushed down the Danube toward Croatia for the promise of land and formed a tight Lutheran enclave in a place where Hitler would one day rule. Did they know they had Judaism in their DNA?

HOBOS:
I also inherit 20th century addictions alchemized by war and poverty to infect the family tree, rot or saw off branches of members and create loveless droughts, marital insanity, illegitimacy, and a darkness that could eat its own.

Wealth is heavy.
We fantasize it will make us free.
It’s just the opposite.
Abundance drops on us a bag of daunt, endless choice, servants instead of friends.
Imagine small gods killing anything with a single choice.
Imagine attachment to EVERY THING! No thing? Free?

Because I am an inheritor.
I also inherit pain.
It is my privilege

to blah blah blah
hog space
run rampant
overeat, overspend
in a society conspiring
to enslave us in ‘greedoms’
7 sacred anti-freedoms
wrath, greed, sloth,
pride, lust, envy, gluttony
that suck off of others.

Freedom invites the too full to lighten UP, the wealthy to weigh less.
Is this possible without Infinite Peace?

Are there different forms of freedom?
What is the freedom I seek?
Freedom from? Freedom to?

Source of Grace: Direct my wealth, power, and name to love freed and beauty abounding.

An account of heart to heart pilgrimage: Jaime and Ligia da Fonseca

Posted on February 22, 2011 by Cynthia Winton-Henry 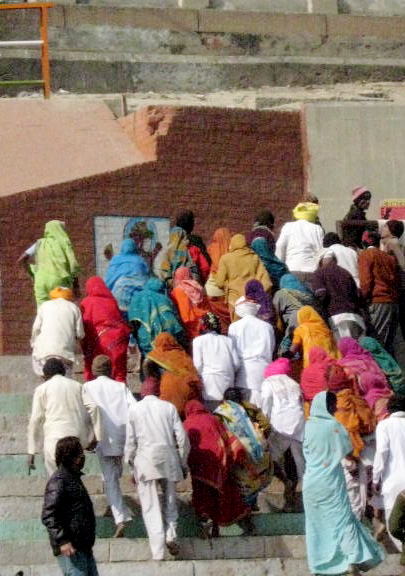 The “Art of Living” (in Varanasi): Want to see how people, animals and everything else co-exist? Well, you have it all here amidst the traffic in the maze of many dug up roads – people on cycles, in rickshaws, buses & cars moving in narrow lanes, cows grazing past you

as you walk in the bylanes and of course people flying kites and enjoying themselves on roof-tops.  On these narrow streets, it is the under privileged that has the upper hand if you happen to bump someone with your vehicle. The voices of the public will protect the needy even if he is in the wrong!

Visiting the many temples at Varanasi and witnessing the thirst of the mass of pilgrims for God and for His compassion and mercy was another experience and a realization we are all one as a broken people, thirsting for God to satisfy us. Witnessing the burning pyres on the Ghats on the river banks on one hand, and little children playing in the mud on these same river banks was another reminder that life goes on . . .   everything happens there, from birth to death – and also that life is beyond what we see. The elaborate preparation for the Maha-Arti was a reminder to how we all need to come prepared to “worship” everytime.  All the sounds, smells and elaborate rituals done in unison made it solemn – a reminder that we are all called to collaborate.

On one hand was a strong Hindu presence at Varanasi and on the other hand was the strong presence of Buddhism at Sarnath.  Somewhere near the banks of the river at Varanasi, we find the Kali temple back to back to a Catholic Maria-Mai Ashram (common wall in between).   Then we come across the Kashi Vishwanath Temple side by side to a Mosque.  Religious places co-existing side by side.

At Varanasi, we InterPlayed with the children at the Nav Vani School for Dumb & Deaf children.  No need of language.  All we needed was a body.  Oh, what a wonderful time we had connecting with them – for 2 hours almost.  In many ways we could be dumb or deaf with all our faculties intact!  We also InterPlayed with the Youth Leaders and Youth Animators from

Their response “InterPlay – this is a new tool for learning”.   More connections, more peace experienced and a lasting desire to connect more.

A strong desire to dialogue with culture, religions and the marginalized is what the pilgrims in this Peace Pilgrimage experienced.  We realized this is possible if we carry LOVE as our partner wherever we go.

Posted on February 15, 2011 by Cynthia Winton-Henry

1. DANCE OF ARRIVAL (January 6th 2011) The plane landed 12.40. The sounds and smells are indefinable even in the quiet early morning. Arriving in India. Waiting for our luggage – Stamped and checked A quick escape via a pre … Continue reading →